Regression in the Service of Omnipotence

Get Updates for Masks of Origin

We are, I believe, as supernatural as we are natural. Our home is the sum-total of all possible realities. When we act, we act both in this world and the next.

Brian George’s debut collection of personal essays invites the reader on a journey beyond the normal categories of space, time, and narrative structure, toward a further shore of multidimensional and more-than-human experience. These are “essays” in the sense of attempts or explorations of a subject which is too vast, and too profound, yet also, paradoxically, too familiar (to some deepest part of us) to be exhausted by any one expression or approach. As George puts it, “The book is not quite a collection of essays, or the fragments of an autobiography, or a record of inter-dimensional journeys, or a work of metaphysics, or a sociopolitical critique, or an attempt to formulate a contemporary mythology—although it has elements of all of these.” To read Masks of Origin, and to re-read it perhaps, and to live with all that it reveals, conceals, and intimates, is to risk encountering the unfathomable within ourselves as much as in the art. As George recursively unravels the contours of his peculiar spiritual landscape, we begin to see aspects our own world history and generational trauma transfigured—as in a psychedelic mirror—in a startling new light. Yet the only drug administered here is the noötropic of poetic language. (You may still wish to avoid operating heavy machinery while under the influence of this book.) With penetrating insight into the soul of post-industrial America and a rare ability to invoke transpersonal states of knowing (even accompanying the thrill of the unknown) in the reader, and with a metaphysical bravado that any dada surrealist might envy, there is also—how to say this?—a down-to-earthness about George that softens our defenses. In Masks of Origin, we meet the artist not only as a cosmic traveler and esoteric yogi, but also as a schoolboy, a son, a rebel, a lover, a teacher, a friend/enemy, and a family man—in short, as a person with adventurous goals but few pretenses. As we follow George in the probing of his origins, we may find that we have suddenly drawn much closer to our own. 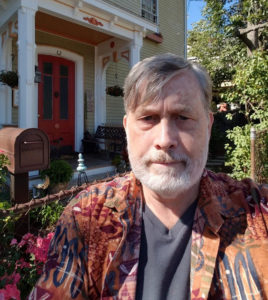 Brian George is the author of five books of poetry and two books of essays, the first of which, Masks of Origin: Regression in the Service of Omnipotence, is being published by Untimely Books in 2022. Other forthcoming titles include Voyage to a Nonexistent Home; To Akasha: An incantation for the End of History; and The Preexistent Race Descends. He is a graduate of the Massachusetts College of Art, an exhibited artist and former art teacher at several Boston area middle schools, a former member of the Boston Visionary Cell, and a former organizer for Evolver Boston. He was a founding member of MAAP SPACE, a multimedia performance series, as well as of the Revolving Arts Salon and the current Cedar Square Arts Salon. He often tells people first discovering his work that his goal is not so much to be read as to be reread, and then lived with.

Blending fantasy and history, fiction and myth, the essays of Brian George read like scripture from a lost civilization or the dream journal of a buried god. Intimate yet strangely universal, this is prose that touches on the very essence of poetry. It wipes away boundaries and liberates forces in the reader and in language itself. Masks of Origin is perhaps best described as a history of our collective soul, as seen through the prism of a singular mind. Surely, George is one of the rare living writers who truly deserve to be called visionary.

J.F. Martel, author of Reclaiming Art in the Age of Artifice: A Treatise, Critique, and Call to Action and co-host of the Weird Studies podcast

The demand for things to simply “be what they are”—no symbols, no masks, just fungible commodities that are forgotten almost as soon as they are consumed to make way for the next meal—seems to be a hallmark of this age. If that is so, some might consider this book a sort of anachronism. But it’s the opposite: a glimpse both of what has been forgotten, and is yet to be. It contains a world of puzzles and ciphers laid out upon the meandering labyrinth path of life. It won’t get you rich, or laid, or cure your bunions. But for those who are still seeking the ineffable, (likely because they have no other choice), it is a pitcher of cool water in the desert, so that you might continue the journey, wherever it leads.

James Curcio, author of Narrative Machines: Modern Myth, Revolution, & Propaganda and Tales From When I Had A Face

In Masks of Origin, Brian George will blow your mind and make you see everything—time, space, life, death—in radically new ways. This is a delightful combination of memoir and philosophical journey. The ideas are complex, but the language is easy to follow, creating an experience that is both profound and accessible. The book is filled with personal stories that touch universal truths. I love hearing about mystical experiences and have heard many amazing stories, but Brian’s stand out for their vividness, depth, and engaging, lucid description. If you’re in the mood for a fun and mind-expanding ride, read this book!

Stephanie Wellen Levine, author of Mystics, Mavericks, and Merrymakers: An Intimate Journey among Hasidic Girls; Columnist at Hevria and The Wisdom Daily

George’s work is precisely its own thing: an archaic genre the western world has long forgotten it possessed, a genre I suspect was already defunct to the Western imagination even at the time of Homer. George is a phenomenal pagan, thrown forwards or backwards in time to this era. I will hesitate to call his work poetry, not that it does not more than serve the function of poetry, but his method is one that predates the definitions we have given poetry in modern literary theory. It is primal incantation, a spell, dreaming as vital action. In Yorubaland, the part of Nigeria where I grew up, one of the praise epithets of Aziza (a supernatural being who travels in a tornado) is, ‘He is the one for whom thought and action are one and the same.’

I read recently that in Holland they have perfected a method that enables their asphalt roads to automatically discover their potholes and repair themselves. I believe the incantation genre, as explored by George in Masks of Origin, is a technology that assists the earth in her attempts to heal herself, after centuries of our having feasted recklessly on her flesh. George’s work harks back to a moment in time or dreamtime memory in which to speak is to act, powerfully, with cosmic stealth, and at times with purgative violence. Its aim is less to inform—though it informs aplenty—than to widen the reader’s gaze in a fundamental way, almost akin to giving the reader the gift of a new tongue.

The universe had no beginning. Reality always existed. The earliest tradition of poetry, carried from Sun to Sun, is carried by Brian George.

Brian George steps over voids with legs that are rainbows, which snap like bands back into his body, catapulting him into the abyss. He free-falls, unwinding from the eye of Providence and plummeting down the spine of Babel.   Leaving more than just a smoking crater, he penetrates to the earth’s molten core, absorbing the shock of earthquakes and storing the energy in his bones, tracing what lay scattered, no matter how disparate and disjointed, back to primal source. He plunges all back in the fire and melts it down to extract what will endure.

Cooling after his incredible creative and alchemical process of solitary determination, Brian George emerges on the other side of earth with an ice-cap on his head, with new tools crafted, new weapons forged, and a new voice and new language even, both intimate and epic, manifold and polyphonic, in his Masks of Origin.

Steeped in myth while staying grounded in day-to-day reality, George ushers forth a contemplative surreality. His writing takes you on a journey through a labyrinth, revealing cryptic truths and exposing the long and treacherous shadow of history. Round and round the labyrinth you go, George’s words leading you like Theseus in search of the Minotaur. And when you have reached the center of the labyrinth, you find God as a detonating atomic bomb—truth as monstrosity, a darkness that illuminates.

The writing of Brian George is built upon personal experience, which he translates into a universal algorithm. Each verse reads as geometrical sequence, keys that unlock pieces of consciousness. This is where poetry becomes music. The poet lives in the center of the vortex, memories flooding his vision, being assigned symbols in the matrix. Brian weaves his way through a hall of mirrors, travelling to emptiness, where the faceted diamond of knowledge is forged and brought to the surface in his writing. His words are clues; one’s understanding shifts and expands the more one reads. There are lingering questions, and passages that come into clarity over time. This only serves to enhance for the reader the incredible fortune of not-knowing, and thus, discovery.

Over a dozen or so years of experiencing George’s writing, I have developed my perception and understanding of it. The cosmology George paints is vast, complete with montages of events and characters. The painting emerges from direct yet oddly juxtaposed language. I savor each sentence until its imagery alights within my mind and then progresses to the next, flowing across dimensions of space and spans of time. The overall effect is of an open field of consciousness. And though the ideas and events may, at times, seem alien on the surface, the writing evokes an evanescent sense of recognition. Somehow, I participated. How do I return? George’s writing creates a bridge into that liminal space.