On blustery nights, fast abed in our halls
We rejoice that outside, the jarring waves,
And cruel rocks may yet keep the raiding-parties distant.
We know if we fall unarmed into their hands
We will be no less loot than the boar-helms or rings
That they take from the slain.

On an unnamed coastline, hidden in the mists of history, a woman is confronted with her husband’s death in battle, drawing on her courage and cunning to secure the safety of herself and her young son and to lead her kingdom into war. But in this brutal society, where life is cheap, the only person who can decide when she has gone too far is herself. Betrayed by adversaries within and without, Queen Ulfhildr proclaims a defiant manifesto in this narrative poem about power and responsibility.

Ulfhildr is an epic poem in 3 parts, written (approximately) in Anglo-Saxon meter. Featuring a heroine as post-tragic as she is powerful—as daring as she is doomed—in a poetic tour de force told with ruthless economy, this book will prompt deep questions in the sensitive reader concerning leadership, love, and fate.

Untimely Books is pleased to be publishing a special limited-edition chapbook of Ulfhildr with custom artwork. Sign up to be notified when this special edition is ready for pre-order. 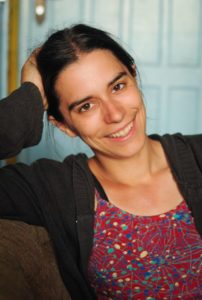 Mary Thaler is a writer, zine-maker and environmental microbiologist. She is currently revising the manuscript of a historical novel about the Arctic. Her work has appeared in numerous literary journals, and can be found online at marythaler.wordpress.com