Plenum: The First Book of Deo

From the series The Ido Chronicles

Get Updates for Plenum: The First Book of Deo

Vanu Francoeur is a novice in the Kinship of the Suffering God, a religious community whose mandate is to seed new stars within a stellar nursery. Vanu feels confused about hir neutral gender, and is also conflicted in hir relationships, especially with hir own sibs. An encounter with an exotic outsider stirs up a storm of conflicts within the usually quiet community. Vanu discovers that the authoritarian culture of the Kinship has deeply troubling flaws. In protest, zhe and hir sibs are drawn towards a dramatic resolution deep within the fires of a star, with consequences that could stretch across the decades and centuries to come.

Plenum: the First Book of Deo is the first book in The Ido Chronicles. This “braided quintet” of fifteen novels unfolds half a million years in our future, after humanity has populated billions of planets and other habitats within a region of the Milky Way called the Humanitat. With the help of biological and nanotechnology (collectively, “binach”), humans live in environments that are almost unimaginably extreme.

About The Ido Chronicles

The Ido Chronicles recounts the story of the last major crisis in the development of humanity before our ability to understand history is lost, as the complexity of change defies understanding.

The action takes place thousands of years in our future, at a time when humanity has expanded into a significant part of the galaxy. The story is grounded, however, in the idea that humans develop biotech and nanotech into a set of modular cocktails that update, enrich and enable human biological functioning in environments much more extreme than is common today. The ubiquitous availability to these technologies radically alters our current economic environment, and following a chaotic period of reorganization, human civilization is driven forward by a pan-galactic collective infrastructure that is part game, part oracle, part government, called the Ido. Furthermore, in the early days of expansion into the solar system, a technology is developed that can be used to slow the flow of time across a bounded region of space. The tempo field enables people to travel to the stars within a lifetime—in this universe, all interstellar transports operate at speeds less than the speed of light. No warp drive!

Within this restructured future civilization, five factions, each representing a different vision of the way forward, emerge. These are: UmaFax, which views human development as essentially creative; EngFax, those who consider technology to be the key to our future; EcoFax, which sees human development in ecosystem terms; DeoFax, focused on theological perspectives; and IdoFax, which situates human evolution in terms of paradox.

The Ido Chronicles is an extensive series of science fiction novels conceived to be a single piece of work. The story has been subdivided into 15 novels, organized into five trilogies (I call the whole collection a “braided quintet,” since each trilogy tells one thread of the same story, and it is the braided collection that provides the full story). The five trilogies follow the lives of five key players, one from each faction, as they intersect and interact. The Crucium Crisis, also called the Sodenheim Crisis, concerns the events that lead up to a major cataclysm in the unfolding story of humanity, as huge star-spanning technologies run amok, and explores the consequences down through the centuries and millennia that follow the crisis.

This is science fiction in the grand tradition of writers such as Isaac Asimov, Ursula K. Le Guin, or Olaf Stapledon, a vast future history. 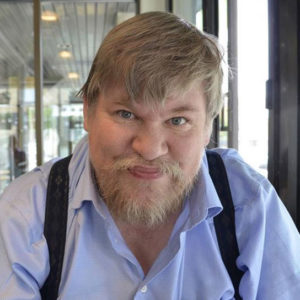 Before becoming a science-fiction writer, Geoffreyjen Edwards led a successful career as a full-time scientist. Indeed, he populates his world-building by drawing on experience in fields as diverse as astrophysics, artificial intelligence, geomatics, design, disability studies and the performing arts. Plenum: The First Book of Deo is his first published novel. Dr. Edwards lives and works in Quebec City, Canada, and has published smaller pieces in both English and French. He also is a fashion designer. Look him up at www.geoffreyjenedwards.com.

Plenum: The First Book of Deo

Vanu is one of those rare characters who stays with us, pushing up against our waking dreams. Hir exquisite curiosity mobilizes worlds we can’t quite fathom even as we live them. This is the power of Plenum: The First Book of Deo. The first of The Ido Chronicles’ braided quintet of trilogies, it launches us into a compelling tale that weaves between story and history, troubling the cleave. We enter with abandon, launched into a realm of complex spirituality and sexuality, our worlds alive with the sound of resonant creatures singing life, and we emerge knowing, in the deepest recesses of our collective being, that any life worth living is born of the most unanswerable of questions. Vanu is a conduit for this learning. We can’t help but follow her lead toward modes of existence yet to be invented. I was deeply moved. What an extraordinary book.

Erin Manning is a philosopher and artist. She teaches at Concordia University, Montreal, Canada. Recent books include The Minor Gesture and For a Pragmatics of the Useless. 3E is the direction her current research takes—an exploration of the transversality of the three ecologies: the social, the environmental, and the conceptual (3ecologies.org)

Like the far off song of the jonahs, Geoffreyjen’s creation is luminous, keening, and strange. The author is at once warm and wise on the page—fearlessly plunging the reader into re-imagined theologies, ambitious political systems, and new sexual landscapes that verge on the poetic. In the world of this book, gender identity can be understood more like a musical scale. Geoffreyjen guides us with intelligence, scientific rigor, and mystical grace into the first chronicle, where we enter a stream of stories so deep and vast that they span universes and eons. We find ourselves far removed from our own planet and time, yet the struggles Vanu and the other characters endure echo our own.

Heather Fester is a poet, essayist, and author of the forthcoming chapbook Ghosts of Things Unsaid. She was an Allen Ginsberg Fellow at Naropa University and directed the Center for Writing & Scholarship at the California Institute of Integral Studies; she now teaches creative writing, rhetoric, and composition courses at the University of Colorado,
Colorado Springs.

A young star gardener embarks on a religious pilgrimage in this debut
space opera.

In a distant, seven-gendered future, where time can move fast or slow depending on one’s position, Vanu Francoeur lives where stars are born. Vanu, who uses zhe/hir pronouns, is a Novice member of the Kinship of the Suffering God, a religious community. The Kinship inhabits the Annex, a space station floating in the Plenum Star Nursery. Vanu is right on the cusp of adulthood and, as such, will soon be a full member of the Kinship, though zhe still doesn’t quite understand the nature of God or the complexities of tending to the Star Nursery. Two strange occurrences arise to shake up Vanu’s world. The first is a sexual encounter with a female visitor to the Annex that proves controversial among the other members of Vanu’s community. The second is a dream vision of darkness that excites and awakens hir spiritual self. The two may in fact be related: According to one of Vanu’s superiors, people are more receptive to visions after a sexual encounter. The Kinship’s reaction to Vanu’s relationship causes hir to question if zhe will find what zhe needs in its teachings—like the mystery of the song sung by a space-inhabiting descendant of Old Earth’s whales. In this novel, Edwards not only creates a rich world, but renders it in vivid, lyrical prose as well. Vanu looks at a nebula “as a creature of the deep might stare towards the distant lights of the surface. The pastel ceiling was intercut with dark bands and splashes of varicoloured luminosity, violets, pinks and yellows, shapes that echoed hir inner turmoil, the fires of space frozen in time.” The vocabulary takes some getting used to, though there is a certain logic to much of it (the descendants of whales are known as jonahs), and the author helpfully includes a glossary in the back. This is only the first installment of a 15-volume SF series following five far-future subcultures. While that may seem like an intimidating prospect, Edwards demonstrates an imagination befitting an epic on that scale.

A poetic and wondrous SF tale that grapples with gender and faith.

I received this book from the author in exchange for a fair review.

Plenum is a deep, complex, and fascinating sci-fi speculative fiction. It balances complicated topics with elegiac prose that serves to simplify the philosophical and often existential questions it raises.

Before we get into the review itself, this book deals with a lot of religious stuff. I’m not religious and, to be honest, I have no patience or interest in theology, so, for me to say that I really enjoyed this novel despite the heavy religious focus, is a huge compliment to the author and the novel.

The book is set so far in the future that different full-blown societies have developed based on what I’m presuming are religious exoduses from Earth. I’m guessing there are probably a bunch of non-religious societies out there too, but this novel deals with one religious order in particular and how its approach to sexuality is constricting and, quite frankly, oppressive. It’s fascinating because this society functions where there are seven genders, no traditional family unit, and children are born from external uterine machines – not something to tend to associate with strict religious sects. People live for hundreds of years and this group doesn’t have currency or even that many goods – it seems to be a sort of communism. Other communities have barter systems in place.

That’s the best thing about this novel, really, in terms of narrative skill. You are very much aware that this is a small part of humanity and that while Vanu’s actions have ripples, it’s a very very big universe. The story is mostly about hir.

Regarding plot, the story is quite simple, as a lot of the novel deals with conceptual or philosophical concepts rather than story. This is not a space opera. There’s no ‘pew pew pew.’

Yet, the characters are distinctive and have as much realism as beings thousands or hundreds of thousands of years in the future would have. This is one book that definitely does not rely on telling. We learn about Vanu, Shoshee, Joh, and the other characters’ personalities from their actions and words, which helped created realistic, relatable characters that you care for.

The ending dips more into action, which was a nice change of pace and shows that Edwards is capable of exciting prose as well as deep concepts. That section really reminded me of Samuel Delany quite a bit.

Plenum is artfully crafted and elegant, and I think people who have an interest in the conflation of sci-fi and theology would really enjoy it.

Thank you again to the author. I wish you all the best with this ambitious, fascinating work.

Tina Beier is the author of What Branches Grow and the Burnt Ship trilogy. She’s also a prolific book reviewer and self-proclaimed sci-fi nerd.